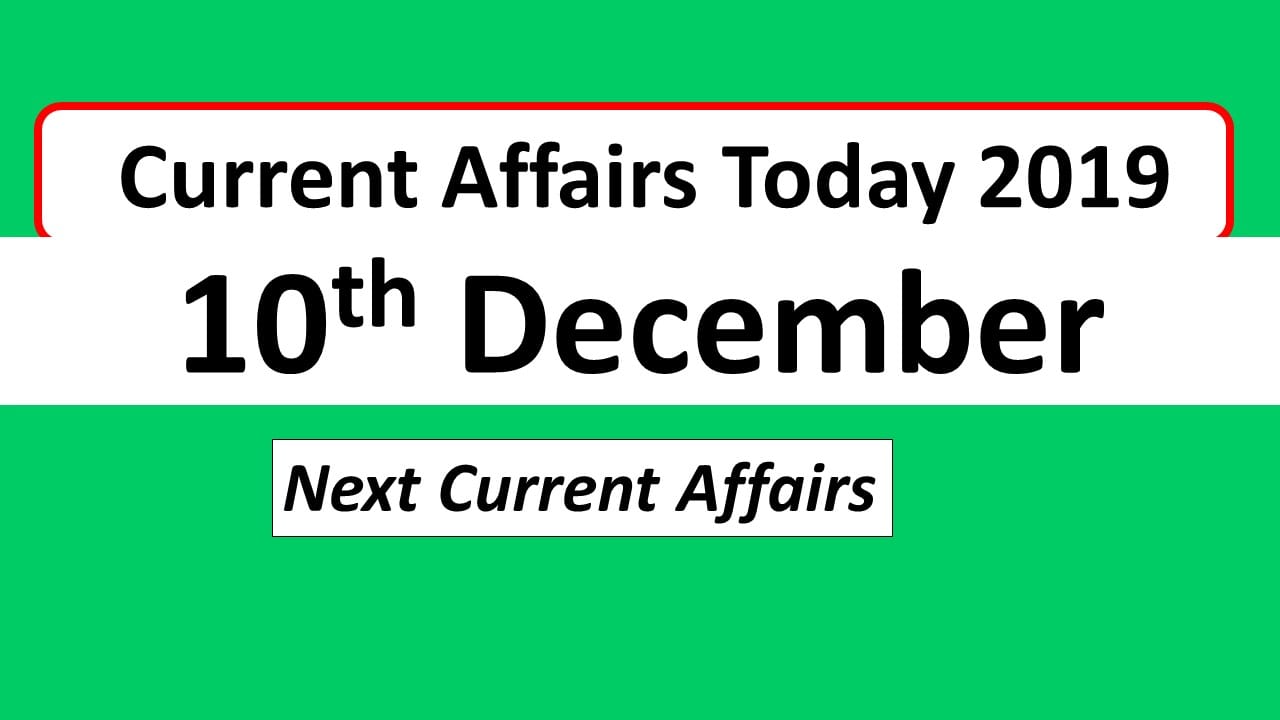 India has been ranked at 129th spot in the 2019 Human Development Index released by United Nations Development Programme (UNDP).

Norway, Switzerland, Ireland are the top three nations on the index.

Human Rights Day is celebrated on 10 December annually across the world.

This Day came into existence on December 10, 1948, when the Universal Declaration of Human Rights was adopted by the United Nations.

Russia banned from Olympics for 4 years over doping scandal

The World Anti-Doping Agency (WADA), banned Russia for 4 years, from participation in global sporting events, including the 2020 Tokyo Olympics and the 2022 Beijing Winter Olympics, after accusing Moscow of falsifying data from an anti-doping laboratory. The Russian flag and national anthem have also been banned in global events.

Abu Dhabi has been selected as the world’s leading Sports tourism Destination at the 26th edition of the World Travel Awards (WTA) being held in Muscat.

This is the seventh time in a row that Abu Dhabi has been selected for this coveted award.

George J. Laurer, whose invention of the Universal Product Code at IBM transformed retail and other industries around the world, has died at age of 94.

Laurer was an electrical engineer with IBM in North Carolina’s Research Triangle Park in the early 1970s when he spearheaded the development of the UPC, or bar code.

Driverless vehicles being tested on 5G technology in UAE

Driverless vehicles are being tested on 5G technology ahead of a planned deployment of such vehicles on roads in the United Arab Emirates.

According to industry reports, 5G-enabled driverless vehicles will be able to have more efficient and quick communication with each other and traffic infrastructure, which will help to minimize traffic jams and bottlenecks. The 5G technology can also enable these vehicles to identify traffics conditions and potential dangers quickly.

Delhi has entered the list of world’s top 10 most popular destinations in the world, according to the recent data published by Euromonitor International.

Hong Kong has remained the topmost for three consecutive years.

The report was based on international arrival data for the year of 2018 in conjunction with estimated part-year data for 2019.

India’s Exim Bank (Export-Import Bank of India) has provided $500 million Line of Credit (LoC) to Bangladesh for defence-related procurement in the neighbouring country.

Exim Bank entered into an agreement with Bangladesh’s Armed Forces Division for making available to the latter a Government of India-supported line of credit (LoC) of USD 500 million.

The News Broadcasters Federation the country’s largest association of over 78 news channels, has elected editor-in-chief of Republic TV Arnab Goswami as the President of its governing board.

An MoU has been signed recently between NSIC and Aramco Asia for the development of MSME Ecosystem in India in Oil & Gas Sector.

The government on Monday said more than Rs 10 lakh crore have been disbursed under the Pradhan Mantri Mudra Yojana till November 1, 2019.

The Above you read our Current Affairs Today 10th December 2019 and also check here below previous days of current affairs.

If you enjoy reading our Current Affairs Today 10th December 2019, Please share your feedback below.