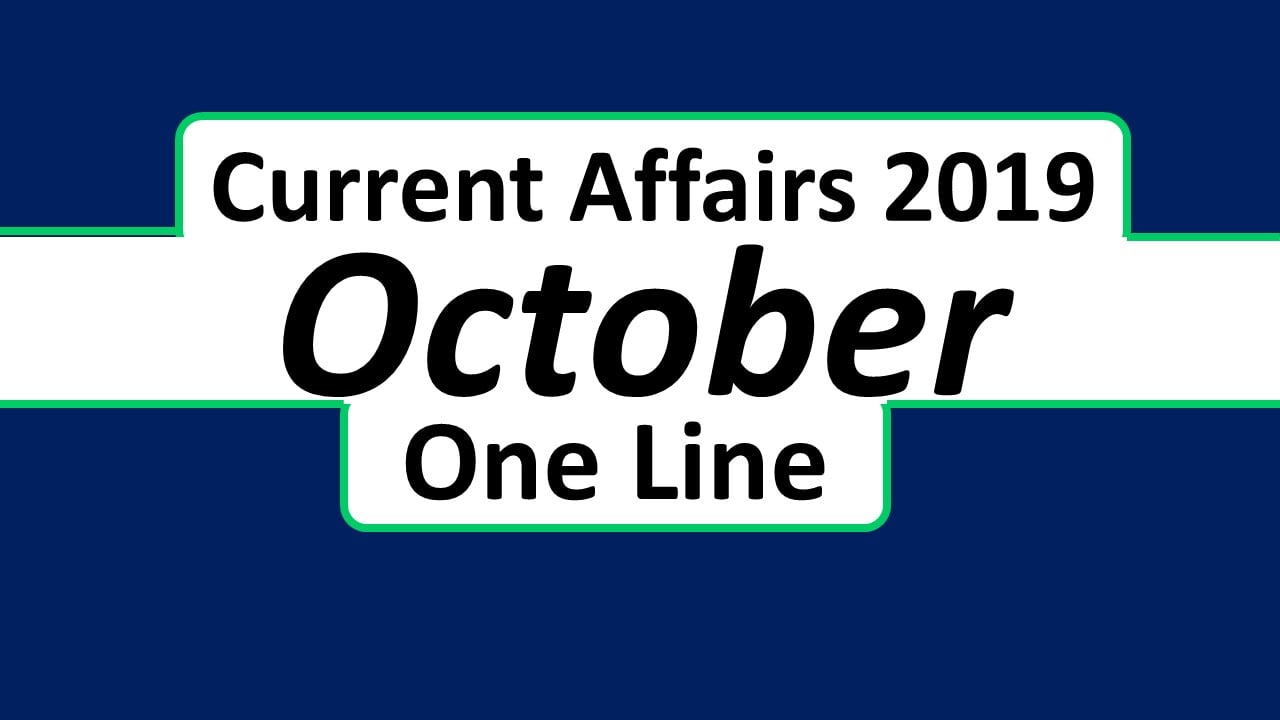 Kallie Puri was honoured with India’s Most Powerful Women in Media award.

Ecuador will quit OPEC from January 2020.

Exercise KAZIND-2019 is a joint military exercise between India and Kazakhstan held in Pithoragarh, Uttarakhand.

India’s first e-waste clinic to be set up in Bhopal, Madhya Pradesh.

Antonio Costa elected as the Prime Minister of Portugal.

A book titled Becoming: A Guided Journal for Discovering Your Voice’ is authored by Michelle Obama.

India will extend over $60 million line of credit to Comoros for Energy and Maritime Defence Cooperation.

Ashleigh Barty has been honoured with Australia’s highest sport honour “The Don Award”.

Credit Saison India has received licence from RBI to set up a non-banking financial company (NBFC).

Bill Gates new book “How to Avoid a Climate Disaster: The Solutions We Have and the Breakthroughs We Need” will be released on June 2020.

GOI signed a loan agreement with ADB worth $190 million for improving road connectivity in Rajasthan.

Lingappa Narayana Swamy has been appointed as the new Chief Justice of Himachal Pradesh High court.

Kais Saied has been elected as new President of Tunisia.

Anup Kumar Singh has been appointed as Director-General of the National Security Guard (NSG).

Rajnish Kumar appointed as the chairman of Indian Banks Association.

Pankaj Kumar has been appointed as the new CEO of UIDAI.

Uttar Pradesh top in the crimes against women recently released by “Crime in India Report 2017”.

Great Britain has won the 9th edition of the Sultan of Johor Cup 2019.

Arvind Singh has been appointed as the chairman of Airports Authority of India.

The Reserve Bank has imposed a penalty of Rs 35 lakh on Tamilnad Mercantile Bank (TMB).

Radha Krishna Mathur has been appointed as new Lt Governor of Ladakh.

IRDAI has set up a Committee headed by S Sadagopan to evaluate applications filed under the Regulatory Sandbox.

Gandhinagar has become the first kerosene-free district of Gujarat.

Filipe Nyusi has been elected as the new President of Mozambique.

Pramod Kumar Tiwari has been appointed as Director General of Bureau of Indian Standards.